Who is The Hu?
In the hustle and bustle of trying to navigate stage to stage, to get between
stages, I missed the majority ot the Hu’s performance at performed at the
annual Aftershock Festival in Sacramento, which took place October 2019.
That little soundbite of music intrigued me so much and made me want
more and I know it did for others. After the festival, choppy videos with less
than ideal sound were uploaded all over social media and there was a lot of
talk about this Mongolian Throat singing band that most had not heard until
that day. So, when I saw that they were performing at a medium sized venue
a couple of hours away, I put it on my calendar and hoped that my personal
life would not intervene and allow me to get a closer experience with this
band.
The draw of the Hu seems to be as much their mystique as their unique style
of music, which seems to be mirrored in the eclectic crowd that showed up
to The Parish in Oakland to also get a closer look and answer that burning
question: Who is “The Hu?”
The Hu formed in 2016, essentially creating their own genre of music by
mixing a blend of traditional Mongolian throat singing with some
hard-hitting rhythmic drumming traditionally seen in metal bands. The band
calls their unique style “Hunnu Rock,” referencing the mongolian root word
for human, Hu. They first gained attention when their music videos went viral
on YouTube, quickly garnering the attention of fans from many different
genres. Their unique sound somehow perfectly combines a spiritual,
rhythmic melody with the hard-hitting metal genre. Guitarist Temka stated
that the Hu tries to “spiritually express this beautiful thing about Mongolian
music. We think we will talk to everyone’s soul through our music.”
No emergencies with family or work. I made it to Oakland. As I walked around
the oddly shaped venue that seemed to have similar style and appeal as an
adult carnival fun house, I hear the opening band strike up their intro notes
and see this guitar player taking full command of the stage. I can easily tell he
is not singing, since his 80’s style rocker hair is heavy banging along with the
beat nowhere near a microphone.
I glance around and I see the drummer, but where is the lead singer? Is he
pulling a Maynard? Nope. Upon closer inspection, I discovered that on stage
is a two-man band from Canada who call themselves Crown Lands. It was the
first time I had ever seen the guitar player have center stage because the lead
singer, Cody Bowles, was also the drummer. Guitarist Kevin Comeau made
excellent use of the center stage with heavy head banging reminiscent of the
glory days of Steele Heart, Scorpions and Motley Crue. Between this
surprisingly awesome opening band and the fact that it was lead throat
singer and morin khuur player Gala’s birthday tonight, we knew it was going
to be an epic show, with that extra touch of energy. The eight member band,
led by the drummers’ rhythmic thump, entered the darkened stage in a
single file line. The drumming intensifies, the lights go up and there is a
beautiful array of musical instruments traditionally not seen in a venue like
this. Jaya steps up to the mic, takes a deep breath, and begins his rebel yell…
insert video Link to clip of the Hu Performing
The Hu performs with traditional Mongolian instruments and begin with
“Shoog Shoog,” a song so heavy and powerful that it makes you feel as if
you’re preparing for battle on the front lines of the Hun army. The Hu has
such a passion for honoring their ancestors and projecting their spirit
through their music that the lyrics are almost negligible. You can literally feel
the passion and the meaning through the intensity of the band’s
performance.
As the night progresses, the Hu takes the crowd on a spiritual journey
through time. One minute you are standing on a bloody battlefield,
victorious after a desperate battle; the next you are slowly riding your horse
through a rolling green meadow with an endless expanse of cloudless, sunny
sky. Chants of “Hu! Hu! Hu! Hu!” between songs, conversing with the crowd
both in Mongolian and English, and even bringing out a cake and singing a
resounding round of Happy Birthday for Gala, draw the crowd closer together
with the band and give the feeling that we are all now part of the tribe and
have come home.With Western Culture defining mainstream pop culture
worldwide, I’ve always wondered when I watched Youtube videos of bands
performing in other cultures, attending concerts of bands performing songs
not in their native tongues were able to get the same experience I felt when I
really, really enjoy a show/performance. Certainly some of the experience is
lost in translation if they are not able to understand the words or the story
behind the song, right? Well, The Hu changed this mentality for me. I felt it,
perhaps even more because I was more intune with the melody; the feeling!
It was there that night at the Parish. I felt it. I get it. I got it.
If you will be in the Columbus, OH or already have plans to attend Sonic
Temple on May 17, 2020, make sure you catch Crown Land. 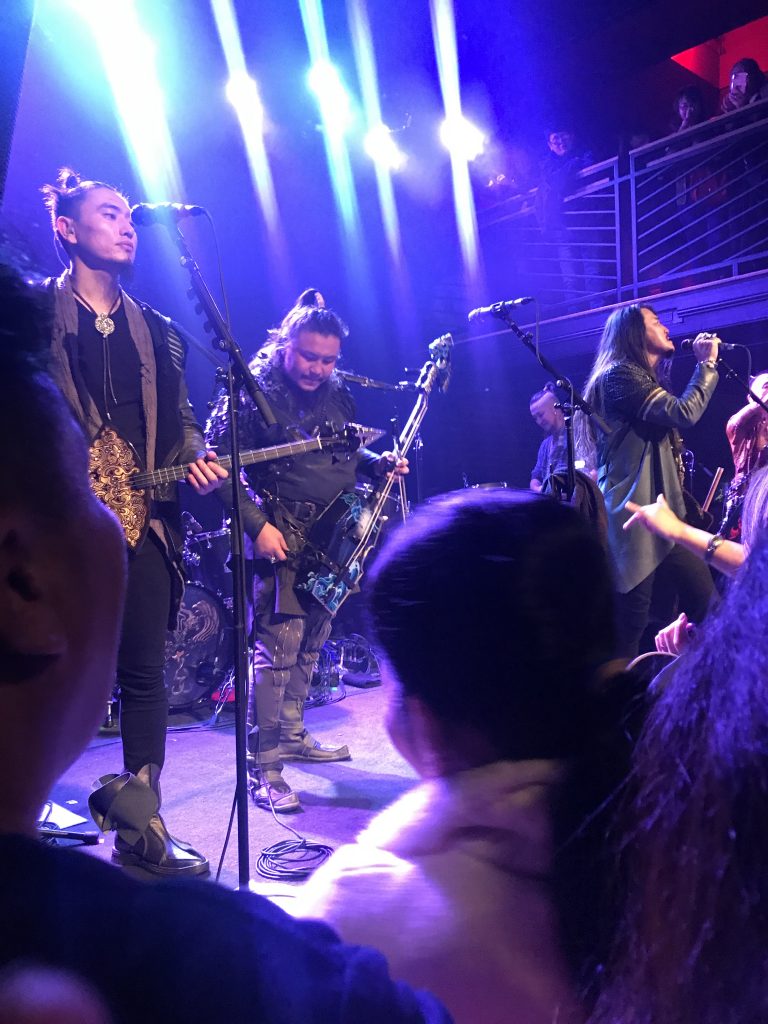